Iraq today; Never Under Estimate the Will of the Peolpe

Home > Relevant links > Iraq today; Never Under Estimate the Will of the Peolpe

BAGHDAD — Anti-government protesters tore down walls and poured into the Iraqi capital’s heavily fortified Green Zone on Saturday, where they stormed parliament in a major escalation of a political crisis that has simmered for months.

Supporters of Shiite cleric Muqtada al-Sadr have been holding demonstrations and sit-ins for months to demand an overhaul of Iraq’s corrupt and ineffective political system, but Saturday was the first time they broke into the Green Zone, home to most government ministries and foreign embassies.

Iraqi security forces fired tear gas at one entrance of the zone but appeared to be largely standing down as protesters marched through the area, chanting and waving Iraqi flags. Hundreds were still pouring into the Green Zone as night fell. Reuters news agency reports that protesters chanted “The cowards ran away!” – apparently referring to the departed politicians – as the protesters crossed a bridge over the Tigris River.

Iraq has been mired in a political crisis for months, hindering the government’s ability to combat the Islamic State of Iraq and Syria, or ISIS — which still controls much of the country’s north and west — or address a financial crisis largely caused by the plunge in global oil prices.

Al-Sadr and his supporters want to reform the political system put in place following the U.S.-led invasion in 2003, in which entrenched political blocs representing the country’s Shiites, Sunnis and Kurds rely on patronage, resulting in widespread corruption and poor public services.

The major blocs have until now stymied the reform efforts of Prime Minister Haider al-Abadi, who has sought to address the protesters’ demands.

Earlier Saturday, al-Sadr repeated accusations that Iraqi politicians are responsible for blocking political reforms. He did not call for an escalation in the protests, but shortly after his remarks, his supporters began scaling the compound’s walls. A group of young men then pulled down a section of concrete blast walls to cheers from the crowd of thousands gathered in the streets outside. 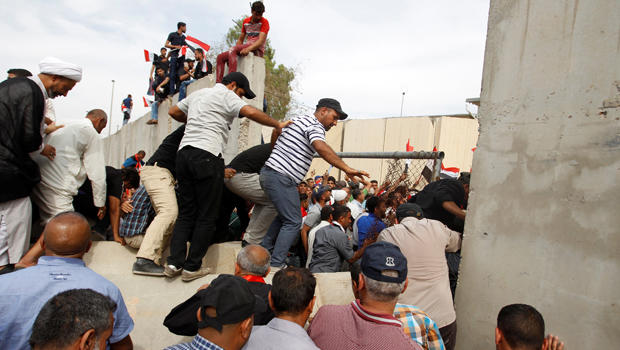 The Green Zone has long been the focus of al-Sadr’s allegations that the government is detached from the people. The compound is off-limits to the vast majority of Iraqis, as security procedures require multiple checks and specific documentation to enter.

Shortly after the breach, cellphone videos uploaded to social media showed dozens of young men running through the halls of parliament, chanting slogans in support of al-Sadr and calling for the government to disband.

“We are all with you (al-Sadr),” one group of men yelled as they entered the building’s main chamber.

Other videos showed a group of young men slapping an Iraqi lawmaker as he attempted to flee the crowd, and protesters mobbing another lawmaker’s motorcade inside the Green Zone. The footage appeared authentic and corresponded with The Associated Press’ reporting.

A Kurdish official said the region’s members of parliament should leave Baghdad.

Iraqi security forces initially responded by tightening security across the capital, sealing off checkpoints leading to the Green Zone and halting traffic on main roads heading into the city, according to the Baghdad Operations Command.

But Iraq’s elite counterterrorism forces, who have in the past been called on to reinforce security in the capital, said they are standing down for now.

“We still view this as a demonstration,” said Sabah al-Numan, spokesman for the counterterrorism forces. “We aren’t taking any part in this as it’s not something regarding terrorism.”

He added, however, that if the unrest escalates his forces may be forced to intervene to “protect the legitimacy of the government.”

Al-Abadi issued a statement saying “the situation in Baghdad is under the control of the security forces,” but also called on protesters to demonstrate peacefully without endangering the “property of state institutions.”

Al-Abadi had been set to appear before parliament Saturday morning to seek the body’s approval for the remainder of his Cabinet reshuffle, but the session was postponed until next week. The last time al-Abadi appeared before parliament, earlier this month, lawmakers hurled insults and called his leadership illegitimate.

The U.N. mission to Iraq said it was “gravely concerned.” It issued a statement condemning violence against elected officials and urging “calm, restraint and respect for Iraq’s constitutional institutions at this crucial juncture.”

Al-Abadi presented a second proposal earlier this month to reduce the size of the Cabinet and replace political appointees with independent technocrats. But opposition from the very political blocs the proposal aimed to weaken stalled his efforts.

Al-Sadr, an influential Shiite cleric whose supporters once battled U.S. forces across Baghdad and southern Iraq, is not a member of parliament. But his supporters make up the second largest parliamentary bloc, with 34 seats in the 328-member assembly, and controlled three ministries before the latest upheaval.

Iraq is meanwhile struggling to maintain security in and around Baghdad, even as it has pushed ISIS militants back on a number of fronts elsewhere in the country.

Earlier on Saturday, a bombing in a market filled with Shiite civilians in Baghdad killed at least 21 people and wounded at least 42 others, according to police and hospital officials, who spoke on condition of anonymity because they were not authorized to brief reporters.

© 2016 CBS Interactive Inc. All Rights Reserved. This material may not be published, broadcast, rewritten, or redistributed. The Associated Press contributed to this report.
May 1, 2016 at 1:18 pm
Relevant links
Voices