Iraq is assessing the rehabilitation needs of the ancient city of Hatra, near Mosul in the country’s north, after retaking it from the Islamic State (IS) on April 26. The jihadist group had occupied the site since 2014 and in March 2015 bulldozed some of the ruins, which date back to the second century and include ancient architecture and other priceless antiquities.

At one point, members of the group appeared in a video using sledgehammers to destroy antiquities, sparking fears that a priceless piece of human heritage, included on UNESCO’s World Heritage List in 1985, would be lost forever.
But the head of Nineveh province’s archaeology department, Faleh Al-Shammari, said initial surveys by Iraqi archaeologists in early May show less damage than expected, affecting about 30% of the city. “Many landmarks were damaged only slightly, especially large and heavy ones,” he said. 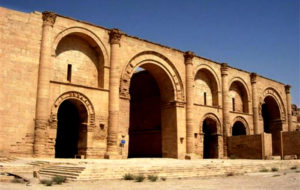 Shammari said IS fighters looted every small artifact that could be moved, including gold and silver coins and Assyrian statues. However, he said, “The remains that were stolen are small compared to the great number of artifacts that were taken to Baghdad in 2000, before the fall of Saddam Hussein’s regime, and were never returned because of the deteriorating security situation. That minimized the losses that happened during the Daesh occupation of the site,” he added, using the Arabic acronym for IS.

“The huge walls, temples and bridges between pillars were not damaged. The ancient halls escaped being blown up, which Daesh has done to major archaeological sites in other areas such as the mosque of Nabi Yunes,” he said.

“Chaos still reigns in the area and the ruins are in disarray,” Shammari explained. “There is rubble in the eastern part of the city, and the destruction can clearly be seen in the square at the main entrance to the city.”

Mohammad Rasmi Harith, a photographer working for the Popular Mobilization Units during the battle to liberate the historic city, told Al-Monitor that IS had not blown up the ancient structures. “It wanted to use them as a base and weapon storehouse, turn its temples into a prison for its captives and clandestine explosives workshops, based on what we saw at the site after it was liberated,” he said. “Security forces finished clearing the city of weapons and leftover munitions, and now they are surrounding it to totally secure it. It will be handed over to the authorities in the next few days.”

Khoshawi Khalil, a member of the parliamentary Tourism and Antiquities Committee, told Al-Monitor the committee had instructed security forces guarding the site to allow archaeologists and technicians to conduct a detailed survey, inventory the damage and prepare an emergency plan to restore the city, which he said “was already neglected before Daesh occupied it and had been extensively damaged by looters.”

Khalil explained, “The first step toward reviving the site will be to retrieve the artifacts that were stolen from it by using Iraq’s diplomatic resources and communicating with foreign states and international organizations, especially UNESCO. Most of Hatra’s antiquities were recorded and documented by international museums, which will make it easier to find them and prevent them from being sold.”

The rapporteur of the Tourism and Antiquities Committee, Iyad Al-Shammari, told Al-Monitor that since 2014, the committee has been working with the antiquities authorities to compile and update a list for Interpol of all the artifacts and ancient texts that were stolen and smuggled out of the country. Artifacts from Hatra came at the top of the list.

Shammari also said Hatra had suffered years of neglect before the rise of IS. An abandoned site in the middle of the desert, it has long been vulnerable to looters. He blamed the chaos following the fall of Hussein in 2003. “The administrative chaos after that date and the financial crisis that has rocked Iraq for years have blocked attempts to rebuild Hatra,” he said.

“Iraq will not have the capacity to rehabilitate Hatra,” he added. “Iraq has asked the Arab League’s Educational, Cultural and Scientific Organisation, UNESCO, and cultural and academic institutions in the United States and Europe that specialize in protecting and restoring archaeological sites to use their expertise to train Iraqis in techniques to protect ancient sites.”

Preserving the treasures of Hatra will require extensive investment and development with an eye toward tourism, which would generate the sustainable income it needs.