A Letter From Mosul

Home > Culture > A Letter From Mosul

A Letter From Mosul 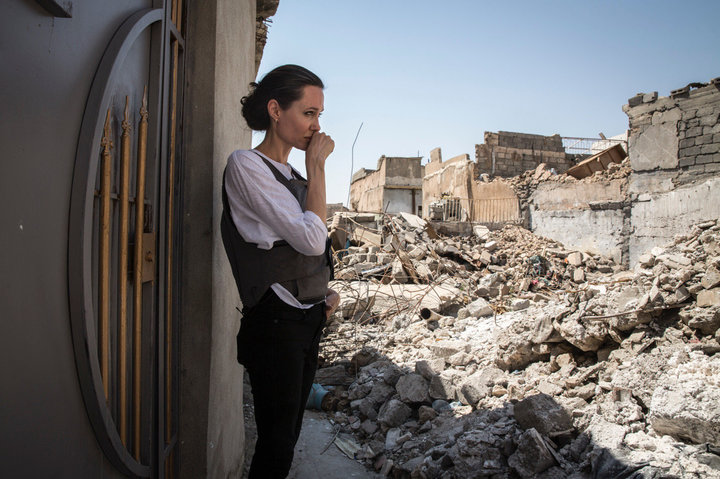 UNHCR Special Envoy Angelina Jolie reacts to the smell of the body of a dead ISIS fighter lying in the rubble of a destroyed building, during a visit to the Old City in West Mosul, Iraq, on June 16, 2018. Less than a year after its liberation, much of West Mosul still lies in ruins.

The largest and longest urban battle fought anywhere in the world since World War II was waged to retake Mosul from ISIS. Liberty came at a horrific price: Thousands of civilians were killed and large swathes of the Iraqi city were reduced to rubble.

Much of East Mosul was spared, but the West still lies in ruins a year after the end of the fighting. As I stood there, it felt as if the guns fell silent only yesterday.

If we’ve learned anything from the last decade in the Middle East and Afghanistan, it is that if a military “win” is not followed by effective help to ensure stability, then the cycle of violence only continues.

You’d think, therefore, that nothing could be more important in this situation than trying to make sure that violent extremism can never return to Mosul. You’d expect that rebuilding a city that was an icon of diversity, peaceful coexistence and cultural heritage would be a top priority. You’d imagine that the streets of West Mosul would be crammed with reconstruction equipment, de-miners, architects, planners, government agencies, and nongovernmental organizations and world heritage experts providing technical assistance to Iraq on a master plan for the reconstruction of the city.

But a year later, West Mosul lies abandoned, ruined and apocalyptic. Walls that remain standing are riddled with holes from mortar fire and bullets. The streets are eerily quiet: hundreds of thousands of former residents of the city are living in camps or nearby communities because there is nothing for them to go back to. Reeking corpses still litter the ruins, awaiting collection.

Are we guilty of performing a form of collective moral triage, selectively choosing when and where we will defend human rights, for how long and to what degree?

In streets that look entirely uninhabitable, small numbers of shell-shocked families are clearing the rubble of their homes with their bare hands, braving the concealed explosives left behind. In the last week, there was an explosion in a house that killed and injured 27 people.

Even worse than the physical ruin of the city is the invisible damage to the emotional landscape of its people. Returning residents have lost homes their families lived in for generations, their possessions, their savings, even the documents that prove their identity. Communities of different faiths who used to live side by side have been thrust apart and are now divided.

A man who approached me described with tears in his eyes how he was lashed by militants. A child told me about seeing a man killed in front of her on the street. A mother and father described the morning when a mortar shell struck their teenage daughter, ripping away her legs, leaving shattered bones protruding. They carried her to a hospital and begged for medical treatment. They were turned away, and she bled to death in their arms.

Injustice and suffering of this magnitude is impossible to quantify. For the people who survived these experiences to have been left on their own and largely forgotten feels utterly wrong and profoundly disquieting. The gap between what they deserve and how quickly the world has forgotten them is shocking.

I found myself asking whether, at another time in history, we would have reacted differently to what happened in Mosul. Would we have reacted as we did after the liberation of Europe after World War II, flooding it with assistance to rebuild and recover?

I thought also of the survivors of the chemical weapons attacks, the hospital bombings, the organized rape and the deliberate starvation of civilians that are all features of contemporary conflicts, and asked myself, have we become numb to human suffering? Are we so doubtful of our ability to act effectively overseas, in light of recent history, that we have begun tolerating the intolerable? Are we guilty of performing a form of collective moral triage, selectively choosing when and where we will defend human rights, for how long and to what degree?

In Mosul, I felt I was standing at a ground zero of foreign policy failures over the last decade. But also in a place that represents the human capacity for survival and renewal, and the stubborn endurance of universal values in individual hearts.

I think of a father I met, and his joy that his two young daughters are now able to go to school again. Penniless and without a roof over his family’s heads, he spoke as if he had no more treasured possession than their report cards. There would be no more profound symbol of victory than every girl in Mosul being able to go back to school and excel.

Not a single family I met in West Mosul asked me for anything. They are not counting on our assistance. Mosul can trace its history back 3,000 years ― I am sure its people will overcome those three years of terror. But how much better it would be if we saw their recovery as our joint endeavor, in the same way that we regarded the defeat of ISIS as a collective responsibility.

Angelina Jolie is the special envoy of the United Nations High Commissioner for Refugees, co-founder of the Preventing Sexual Violence Initiative and a filmmaker.