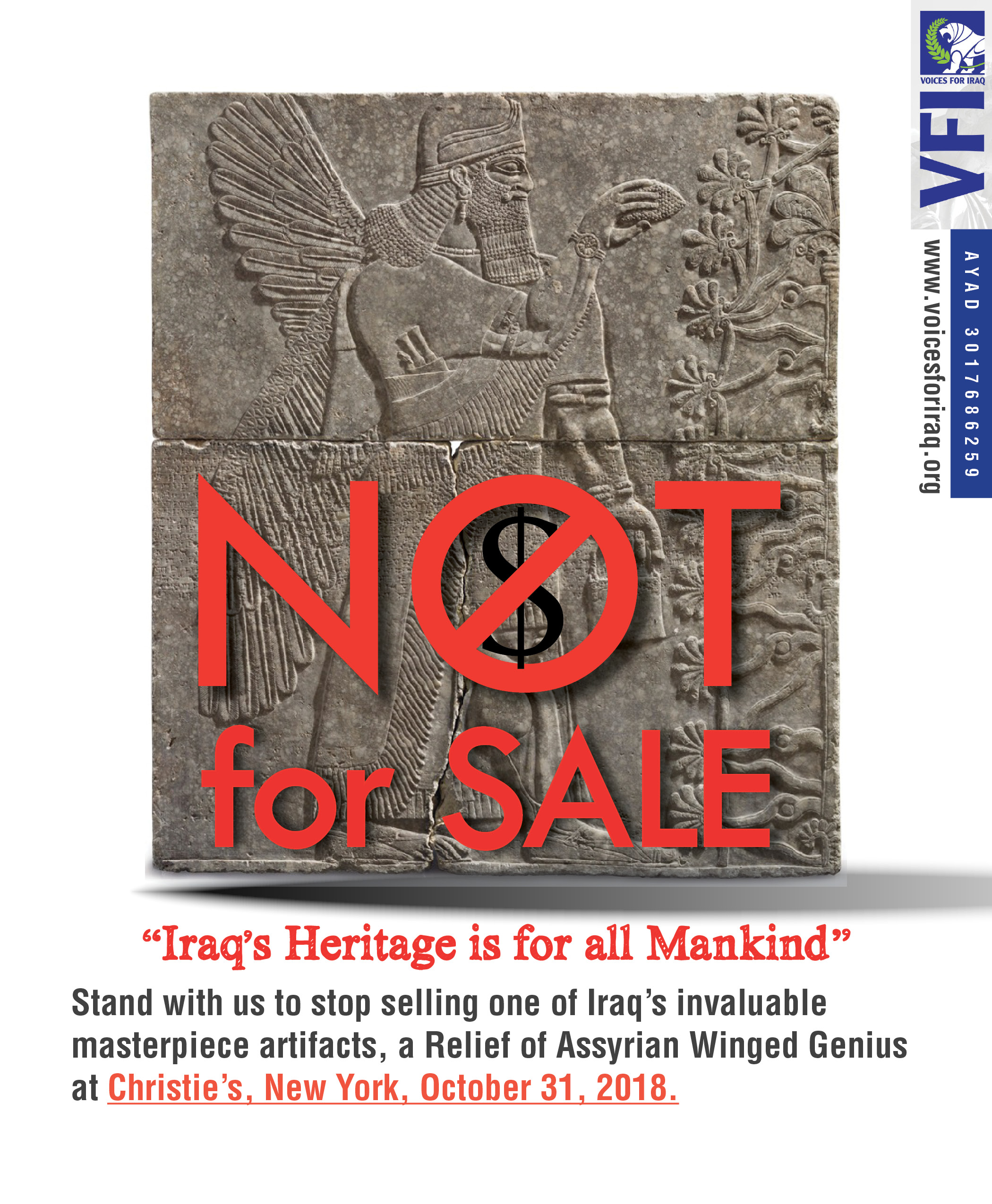 An Assyrian gypsum relief of a Winged Genius.Reign of Ashurnasirpal II, circa 883-859 BC.

A 3000-year-old gypsum carving sold for almost $31 million (Dh114 billion) at Christie’s auction house in New York, shattering the existing record for Assyrian art, despite last-minute protests by the Iraqi government to halt the sale.

The carving of the “winged genius” was billed as the most exquisite piece of Assyrian art to reach the market in decades and formed the centrepiece of Christie’s antiquities sale with an estimate of $10-15m.

William Robinson, international head for world art, introduced the item by reassuring buyers of its provenance and its long history in the US.

“And so we come on to lot 101: The Assyrian relief of a ‘winged genius’ Akpallu excavated with permission of the Grand Vizier of the Ottoman Sultan in the 1840s,” he said as he started the bidding at $7m.

Frantic bidding rapidly pushed it well beyond the previous record of $12m.

The final price brought gasps to the crowded auction room.

With commissions, that means the two-metre frieze sold to an anonymous bidder, standing at the back of the room, for almost $31m.

Iraq’s Foreign Ministry had demanded the return of the rare sculpture just hours before the auction house sale, claiming it belonged to the country.

“The ministry conducted a report showing that the artefact belongs to Iraq and is under the protection of Iraqi Antiquities Law,” ministry spokesperson Ahmed Mahjoob said in a statement on Wednesday.

The seven-foot-high section of bas relief features a winged genie, a deity also known as an Apkallu, holding a bucket and a cone-shaped object. The mural once adorned the wall of of the Northwest Palace at Nimrud and was commissioned by King Ashurnasirpal II, who ruled ancient Assyria from 883 to 859 BC.

Baghdad’s central government has objected to the sale, claiming that the object is a looted piece of the country’s heritage.

“Iraq’s embassy in Washington is following the case with the New York prosecutor and the US government,” Mr Mahjoob said.

Christie’s said that the relief was acquired in Mosul in 1859 by an American missionary named Henri Byron Haskell from the English archaeologist Sir Austen Henry Layard, who led digs near Mosul in the mid-1800s.

Shortly before the sale began, the auction house released a statement defending its position and explaining that documentation showed it had been in Virginia since 1860 onwards.

“In addition, Christie’s proactively contacted law enforcement to review the information prior to publication of the lot,” said a spokeswoman. “Given the full provenance, history and 1860 entry of this work into the United States, the authorities confirmed the object’s documentation well meets all applicable laws governing its sale.”

The piece has been housed at the seminary for more than 150 years but is now being sold to underwrite a scholarship fund, Christie’s said.

But Iraq’s Culture Ministry claims it was only taken from Nimrud during the 1970s.

Mr Mahjoob said the ministry “is in constant touch with all sides to stop the sale of a vital Iraqi heritage”.

Christie’s estimate values the gypsum carving of a god-like figure at as much as $15 million. That would set a world record for the sale of an Assyrian art work, which currently stands under $12 million.

The auction prompted Iraq’s Culture Ministry to contact Interpol and Unesco, the United Nations cultural organisation, to stop the sale and repatriate the ancient artefact.

“We call on all Iraqi and international officials, civil society and the media to take a serious stand in pressuring the Americans in stopping this process, it is a continuation of the destruction of Iraq’s cultural heritage,” Culture Ministry spokesman Omran Ali told The National, adding that steps had been taken to prove that the artefact came from the ancient city of Nimrud.

Jabbar Jaafar, executive director of charity Voices for Iraq, led calls in the US for the sculpture to be returned. He said excavators in the mid-Nineteenth century should not have been allowed to remove the piece.

“There are rules and laws about this sort of thing that only apply after the nineteenth century so we knew there would be problems,” he said. “But we still think it is right to return it.”

The remains of Nimrud was one of Iraq’s archaeological treasures, being submitted in 2000 to Unesco’s tentative list, which is an inventory of heritage sites that countries intend to consider for nomination to World Heritage status.

ISIS looted and bulldozed the site in 2014.