Iraq after Isis: In the fifth part of his latest series, Patrick Cockburn finds Iraqis are losing patience with endemic corruption 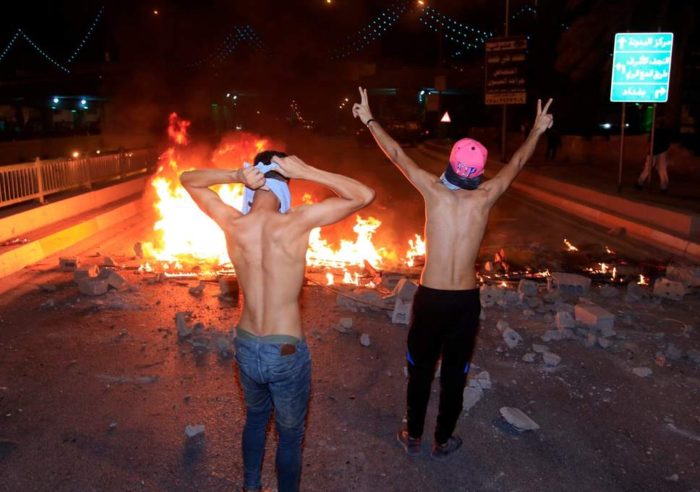 “The people want an end to the parties,” chanted protesters, adapting a famous slogan of the Arab Spring, as they stormed the governor’s office and the international airport in the Shia holy city of Najaf.

Part of the wave of demonstrations sweeping across central and southern Iraq, they demanded jobs, electricity, water and an end to the mass theft of Iraq’s oil wealth by the political parties.

Beginning on 8 July, the protests are the biggest and most prolonged in a country where anti-government action has usually taken the form of armed insurgency.

The demonstrations are taking place in the heartlands of the Shia majority, reflecting their outrage at living on top of some of the world’s largest oilfields, but seeing their families barely survive in squalor and poverty.

The protests began in Basra, Iraq’s third largest city which is at the centre of 70 per cent of its oil production. A hand-written placard held up by one demonstrator neatly expresses popular frustration. It reads:

Sorry Pythagoras, we are in Basra”

The protests started in Basra  and quickly spread to eight other provinces, including Najaf, Kerbala, Nasariya and Amara.

In several places, the offices of the Dawa Party, to which the Prime Minister Haider al-Abadi belongs, were burned or attacked, along with those of parties whom people blame for looting oil revenues worth hundreds of billions of dollars in the 15 years since the overthrow of Saddam Hussein.

As the situation deteriorated, Mr Abadi flew to Basra on 13 July, promising to make $3 billion available to improve services and provide more jobs. After he left, his hotel was invaded by protesters.

The credibility of almost all Iraqi politicians is at a low ebb, the acute feeling of disillusionment illustrated by the low 44.5 per cent turnout in the parliamentary election on 12 May that produced no outright winner.

The poll was unexpectedly topped by the Sairoun movement of the populist nationalist cleric, Muqtada al-Sadr, who has encouraged his followers to start protests against government corruption and lack of services since 2015.

The Sadrists, who emphasised their socially and economically progressive programme by allying themselves with the Iraqi Communist Party in the election, are playing a role in the current protests.

The demonstrations are also backed by the prestigious Grand Ayatollah Ali Sistani. At ground level, political activists and tribal leaders have set up a joint committee called “the Coordination Board for Peaceful Protests and Demonstrations in Basra”, its purpose being to produce a list of demands, unite the protest movement, and keep their actions non-violent.

“The ends don’t justify the means,” says the committee in a statement. “Let us, being oppressed, not lead to the oppression of others.”

A list of 17 demands is headed by one asking for a government time table for supplying water and electricity, both of which are short at a time of year when the temperature sometime exceeds 50 C, making it one of the hottest places on earth.

Local people claim that the last time that the port city of Basra, once called the Venice of the Gulf, had an adequate supply of drinking water was in 1982. Iran had been supplying some extra electricity, but has cut this back because of its own needs and failure of Iraq to pay on time.

The second demand of the protesters is for jobs with “priority to the competent sons of Basra”, the discharge of foreign labourers and employment for a quarter of people living in the oilfields.

Lack of jobs is a source of continuing complaint all over Iraq. Much of its oil income already goes on paying 4.5 million state employees, but between 400,000 and 420,000 young people enter the workforce every year with little prospects of employment.

Anger towards the entire political class is intense because it is seen as a kleptocratic group which syphoned off money in return for contracts that existed only on paper and produced no new power plants, bridges or roads.

Political parties are at the centre of this corruption because they choose ministries, according to their share of the vote in elections or their sectarian affiliation, which they then treat as cash cows and sources of patronage and contracts.

Plundering like this and handing out of jobs to unqualified people means that many government institutions have become incapable of performing any useful function.

Radical reform is difficult because the whole system is saturated by corruption and incompetence. Technocrats without party backing who are parachuted into ministries become isolated and ineffective.

One party leader told The Independent that he thought that the best that could be done “would be to insist that the parties appoint properly qualified people to top jobs.”

The defeat of Isis in 2017 with the recapture of Mosul means that Iraqis are no longer absorbed in keeping their families safe so they have they have more time to consider “corruption” –  a word they use not just to mean bribery but the parasitic nature of the government system as a whole.

There is a general mood of cynicism and dissatisfaction with the way things are run.

Corrupt motives are ascribed to everything that happens: a series of unexplained fires in Baghdad in June were being ascribed to government employees stealing from state depots and then concealing their crime by setting fire to the building and destroying it.

Given that the Iraqi security forces are primarily recruited from the areas in which the protests are taking place, the government will need to be careful about the degree of repression it can use safely.

Some eight protesters have been killed so far by the police, who are using rubber bullets, water cannon and rubber hoses to beat people.

The armed forces have been placed on high alert. Three regiments of the elite Counter-Terrorism Service, which led the attack on Mosul and is highly regarded and well disciplined, has been ordered south to cope with protests and away from places where there is still residual activity by Isis.

The protests are largely spontaneous, but the Sadrists, whose offices have not been attacked by crowds, want to put pressure on Mr Abadi, Dawa and other parties to form a coalition government with a reform programme.

Many protesters express anti-Tehran slogans, tearing up pictures of Iranian spiritual leaders such as Ayatollah Khomeini and the current Supreme Leader Ali Khamenei. They blame Iran for supporting corrupt parties and governments in Iraq.

Protesters have so far escalated their actions slowly, gathering at the entrances to the major oil and gas facilities, but not disrupting the 3.6 million barrel a day production. If this happens, it would affect a significant portion of world crude output.

Iraq’s corrupt and dysfunctional governing system may be too set in its profitable ways to be reformed, but, if the ruling elite wants to survive, it must give ordinary Iraqi a larger share of the oil revenue cake.